How Builders by Design are integrating GeoSLAM into their workflow

Established in 2001, Builders by Design Ltd are a multi-disciplinary design and construction company based in London, UK. Their expertise and services are mainly in the residential sector for new builds, conversions, and extensions. The core business is a combination of collaborations via competitive tender, negotiated contracts and design and build. They also have a bespoke joinery workshop facility in Park Royal, designing and fabricating furniture, kitchens, windows and doors. One of their greatest achievements to date was being selected as the main contractor for Peacock House, a new build in Aldeburgh, Suffolk which was awarded a National and Regional RIBA award and was long-listed for Grand Designs House of the Year in 2017. 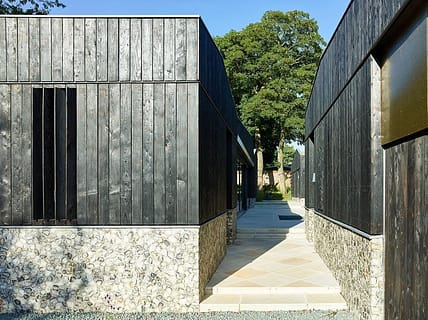 We spoke with Director Nick Phillips following their recent purchase of their GeoSLAM ZEB Revo RT to get an understanding of how this was helping to support their business. Previously, external companies were appointed to produce the 2D surveys which proved to be expensive, time consuming and not without errors and omissions.

Traditional 2D surveys instructed, would only take limited data meaning important details on areas, such as staircases, were incomplete. Inevitably there were times during the later stages of design and construction that the absence of such details required re-working of proposals. The manual process was also not very efficient, as it could take a full day for 1 person to survey a 3-bedroomed house and several weeks to receive the results. Nick identified that projects with existing structures should always start with comprehensive 3D data, which led to the purchase of the GeoSLAM ZEB Revo RT to enable 3D data capture in-house.

‘Bringing 3D data capture in-house was the obvious next step, with speed and accuracy important factors. For this and other reasons we selected GeoSLAM to provide the equipment and software required. We are still at a relatively early stage; however, it has had a positive impact on our workflows, which we will look to keep improving’

Before purchasing the ZEB Revo RT, other scanners were considered, such as terrestrial and static, but there were time and software limitations to adopting these more traditional systems. Using these methods was not efficient enough for Builders by Design, as they needed technology with speed, accuracy, and ease of use. Using GeoSLAM handheld solutions meant they could complete between 6-8 scans a day, with the accuracy they needed, whereas a static scanner may only achieve 1-2 scans a day. With current Covid-19 restrictions, having a single operative on site for only 30-minutes to complete the internal and external data capture can bring logistical advantages where a property is still occupied.

Builders by Design have integrated the ZEB Revo RT as an integral part of their digital workflows, providing all the stakeholders with dynamic visualisation material for project design. They use the ZEB Revo RT to scan the 3D pointcloud, importing the data into CAD software to create 3D models and 2D planning documentation for the design team. Working in 3D environments together with other visualisation tools has also created a transparency and understanding of design intent between the Architect, the site team and the client that could not have been achieved with 2D plans, sections, and elevations. Having utilised the GeoSLAM ZEB Revo RT in-house to identify the many benefits to the business, they plan to collaborate with external Architectural and Design practices undertaking their own digital transformation journey, to build templated 2D documentation of existing buildings, 360° site photos, 3D model and bespoke CAD packages.

In closing, Nick emphasised that:

‘As the restrictions are lifted and the dust settles, the bar has to be raised to a new level. Delivering a point of difference from the competition will become increasingly essential to remain relevant in the market, requiring new 3D technology adoption to assist in achieving fewer errors and more predictable outcomes for all building projects. The benefits are far-reaching and will be embraced by the client and all collaborators across the project delivery team.’