When a hole in the ground started to appear in a playing field in Buckinghamshire, UK, a rapid assessment of the site and the newly appeared sinkhole was needed.

Geoterra was appointed by the local Parish Council to carry out a 3D laser subsurface scan and video survey, and Managing Director Mark Hudson knew his GeoSLAM device was the only option to quickly and most essentially, the safest way, to find out the size and depth of the sinkhole.

The site had been used to excavate clay for brick making, and when it was decommissioned the area was backfilled with waste, and covered with soil. The land was then turned into a playing field. 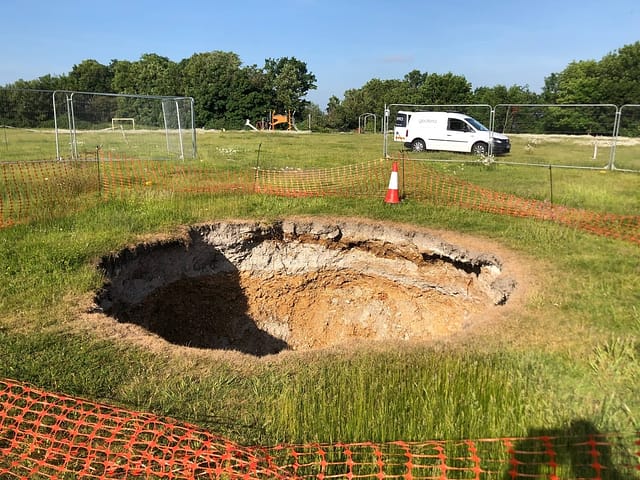 The depth of the sinkhole was unknown, but clearly a hazard.

A survey was needed to assess the depth, size and extent of the sinkhole and bell pit. A full geophysical survey of the playing field was also carried out to locate any further sinkholes or old mining features.

Geoterra used a handheld SLAM device, with a ZEB cam to carry out a surface laser scan. The same device was then lowered down into the centre of the void with access provided by a long reach boom arm from a portable MEWP. Using a bespoke shaft bracket, complete with high powered lighting, the scanner was lowered to a depth of 45m in order to fully survey the sinkhole and bell pit. The survey was geo-referenced to OSGB OSTN15 National Grid.