After the Storm – Mobile mapping after a Hurricane

“This would have taken over 75 hours of scanner time alone with a static scanner, with the ZEB-REVO we were able to accomplish this in only 2 days”

2017’s Hurricane Irma was the most powerful storm to hit the continental United States since Katrina in 2005. Besides the high human cost (almost 100 lives lost in the US) the financial cost to property was estimated to top $50 billion – the 5th costliest hurricane in US history.

Amongst those damaged properties were the Westlake Apartments in Savannah, Georgia – a complex of 14 buildings containing 100 individual apartments encompassing over 111,000 sq. ft. These residential structures were flooded by the storm surge – meaning major renovations were required to repair the significant water damage. 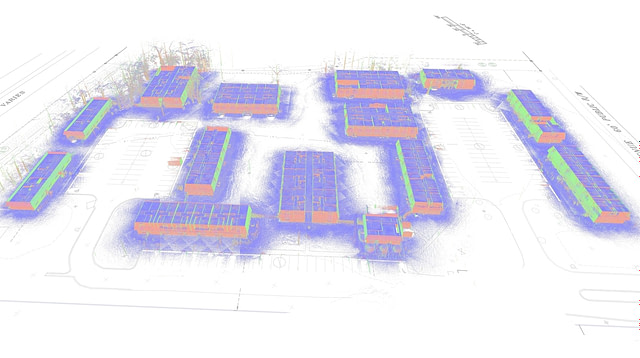 The Westlake Apartment complex consists of 14 buildings and over 1,000 rooms

With the complex dating from 1974, no building blueprints were in existence. The huge task facing contractor Choate Construction was therefore to rapidly collect this spatial data to produce
the necessary internal floorplans and external elevations. Utilizing a static scanner was out of the question as to capture all necessary data would have required over 1,500 individual set-ups – at an estimated timescale of 3 weeks.

Mobile, handheld mapping was therefore the ideal solution – chosen for its incredible speed and ease of use. Instead of 1,500 scans, just 14 scans were required (one scan per building) to collect the necessary building elements (floors, walls, ceilings, rooves, doors, and windows) within the required accuracy tolerance.

The Choate Construction team utilized the ZEB-REVO Solution from GeoSLAM to complete the job. With individual scans as quick as just 7 minutes, the average scan time was 40 minutes per building. In total, the team spent less than 10 hours scanning – spending just 2 days on site.

This speed was of particular importance as the residential units were in occupation – with a scan time of just 5 minutes per unit, disruption to residents was kept to an absolute minimum.

The survey team were delighted with the high reliability of the scan data, all within 1” relative and absolute accuracy.

They were also surprised by how well the external features (exterior walls and sloped rooves) were captured – with no drift or errors encountered.

Building elements such as floors, walls, windows and doors were captured in 3D and built in a Revit model

The office team were able to view the individual 3D point clouds, as well as merging them into one. The data was also sliced into plans, sections and elevations within GeoSLAM Draw, and exported in a CAD-friendly format. From this data, an accurate 3D Revit model was built and supplied to the project architect.

With the increasing incidence of ever-more powerful tropical storms, and an ageing property stock, such quick and simple survey solutions are surely the way of the future.