GeoSLAM brings to life the hidden truths behind historic sites

When surveying and mapping historic sites, surveyors are confronted by a number of challenges, not least the age and structural condition of the site.  Accessibility is often a key factor especially in confined areas such as labyrinths, tunnels and stairwells when you’re literally working in the dark. Aging walls, masonry defects and timber decay must be taken into consideration when inspecting and surveying a building which, say, could be a thousand years old. Also, in many cases the stone walls might be several feet thick and often there is limited or no GPS. With time-saving a priority, the demand for fast and efficient 3D models is greater than ever before.

This is where GeoSLAM, a global market leader in 3D mapping technology, comes to the fore. With GeoSLAM’s innovative technology, historians, archaeologists, students and surveyors are all able to quickly and easily uncover the past and bring heritage sites back to life. Here are 5 ways GeoSLAM has helped overcome specific challenges associated with mapping historic sites:

Thornton Abbey, Lincolnshire – because you don’t need to be a surveyor to survey

Thornton Abbey’s 14th-century gatehouse is one of the largest and most magnificent monastic gatehouses in Britain. In conducting a survey of the site, university student, Rodolfo Rodriguez, was faced with the challenge of mapping a structure that contains a myriad of tight spaces, spiral staircases and rooms, some of which are only accessible via a ladder. In particular, he was keen to understand how the building was designed and how it was inhabited in the late-Middle Ages: how rooms were divided or connected, where floor levels changed over time and what services were incorporated into the building structure.

A decision was made to use a GeoSLAM ZEB Revo and ZEB Cam mobile laser scanner to collect the internal dimensions (and the two datasets aligned post processing for a complete scan). That it would be used by someone unfamiliar with the technology didn’t matter because GeoSLAM’s lightweight, mobile scanners are user-friendly to the extent that they can be used without comprehensive training by anyone. Rodolfo was trained in minutes and scanning in minutes, and building an accurate 3D model of Thornton Abbey in real-time. With GeoSLAM’s ‘pick up and go’ mobile scanners, the time spent scanning the building’s internal structure was under one hour – considerably less time and effort than using conventional techniques.

A pointcloud and imagery is combined to produce a reality mesh, in software such as Bentley Context Capture

Surveying historic sites with traditional methods can prove time-consuming and costly especially when you can’t predict what you’re up against in terms of aging structure and difficult-to-access spaces. Hidden passageways, narrow staircases and towering turrets can prove a real challenge for static scanners that require a large number of separate set-ups and added post-processing work, increasing both time on-site and project costs.

Which is a no-go when time is of the essence, as was the case when the surveying of a beautiful 12th-century Benedictine monastery in Jerusalem came with an inconceivable time restraint. This was because the entire building needed to be surveyed within the thirty-minute period between the end of Vespers – the evening service –  and the time when the public would be allowed into the monastery. Whereas a project of this nature with such a tight deadline would have been beyond the scope of static scanners, it was tailor-made for GeoSLAM’s laser scanning technology. With the use of a highly mobile ‘go-anywhere’ ZEB Revo scanner, the reconnaissance, scanning and creation of a detailed 3D record of the building were done in just 30 minutes – a fraction the time that a static survey would take.

Depending on the building’s age and accessibility, some historic sites are easier to survey than others.  Each has its own set of challenges which in some cases can be overcome with the use of traditional survey methods.  However, when it came to surveying Oriel College, part of the University of Oxford, its labyrinth of historic buildings threw up a particular set of challenges. The 700-year-old college has around 200 rooms across five storeys, including an ‘island site’ accessible only via a tunnel.

Due to the age of the structure, and the way structures have been added to the college over the years, no accurate floor plans or elevation drawings exists. Yet the unusual shape of the building, with its unconventional layout and complex network of rooms, meant it was too difficult and time-consuming to survey with traditional static tools. Also, there is a lack of GPS coverage in the tunnel and, moreover, the building had to be surveyed with minimal disruption as it is occupied 24/7.

The only option was to use a handheld, lightweight tool such as GeoSLAM’s ‘go-anywhere’ ZEB Revo laser scanner, which is designed to survey the most difficult-to-access places in the fastest possible time. Wherever you can walk you can scan, and GeoSLAM’s innovative, award-winning software, turns data into real-time 3D information, delivering rapid and accurate results within minutes. The site team can also check the survey data instantly, to reduce the risk of ‘data omission’ from missed features. Using the ZEB Revo, the entire project was completed within five days, and for first time, accurate floor plans were available. 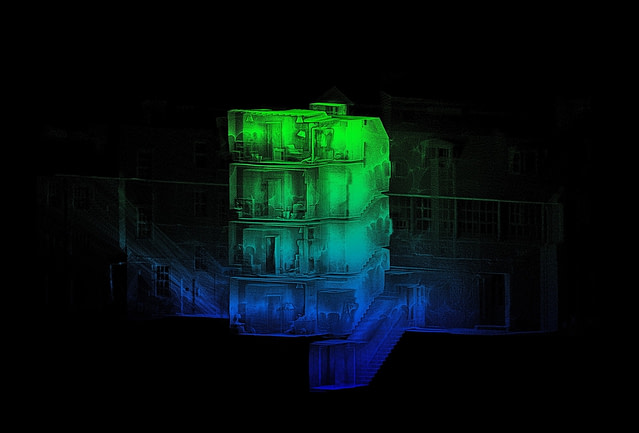 Built as an underground narrow-gauge railway in 1863, the Ramsgate Tunnels in Kent were used to shelter some 60 000 people during WW2. As such, the five-kilometre network of underground passageways – in some places 27 metres deep – became the most extensive underground public shelter system in the world.  After falling into disrepair, leaving behind a long-existing collapse in one area of the tunnels, it was decided to redevelop the site.

This meant providing a preliminary map of the damage to assess tunnels that were previously inaccessible. Having to work in restricted environments and without the aid of GPS nullified the use of unwieldy and time-consuming terrestrial techniques. The situation called for the use of GeoSLAM’s digital technology.

Enlisting the help of GeoSLAM’s lightweight, handheld ZEB Horizon laser scanner, the survey team was allowed to assess tunnels that were previously inaccessible, and map the extent of the damage and the approximate location relative to the surface. A total of nine scans comprised the complete survey, taking around 10 minutes for each scan. Our fully-mobile technology is adaptable to any environment, and opens up areas which are ordinarily off-limits to human survey teams.

Fountains Abbey, Yorkshire – anywhere you can walk or reach, you can scan

In the main, heritage sites are not only built on uneven ground with irregular foundations, but the buildings often have winding passages, spiral staircases and narrow tunnels. Fountains  Abbey in North Yorkshire is no exception. Founded in 1132, the abbey is one of the largest and best-preserved ruined Cistercian monasteries in England. Its ruined chambers, cloisters, dormitories, alcoves and cellars together with an imposing 50 metres tower, make surveying a challenging prospect.

While enclosed spaces with restricted access negated the use of static set-ups of bulky, tripod-based conventional systems, GeoSLAM’s fully mobile and adaptable technology was ideally suited to survey the site, quickly and accurately. GeoSLAM’s lightweight, handheld scanners make it easy to walk and scan, even on multi-levels and uneven ground, and in tight spaces. Alternatively, they can be attached to a drone for airborne mapping or a pole for hazardous spaces such as deteriorating floors or walls.

Robust, dust-tight and splash-proof, GeoSLAM’s laser scanners can adapt to any environment, especially complex and enclosed spaces, without the need for GPS and in daylight and darkness. By creating a highly accurate 3D model of any environment within minutes, and providing continuous monitor data, more surveys can be carried out, to a higher quality.