With coronavirus putting summer 2020 officially on hold, holiday-makers the world over have been encouraged to get out and explore what’s on offer in their own backyards rather than venturing further afield. Channel Manager for Canada, Matt Teppler (based out of Calgary, Alberta) embraced the “new normal” and combined entertaining his family with the chance to capture some fun ZEB Horizon scans. 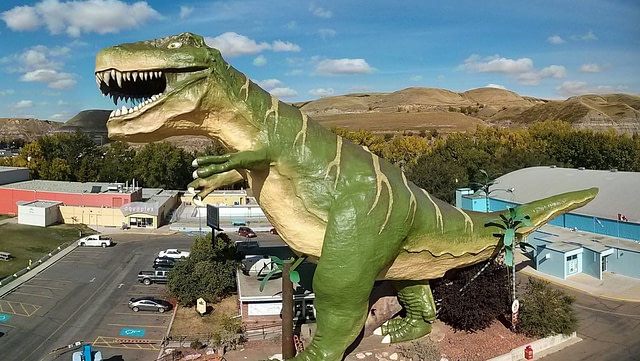 Built in 2000, The World’s Largest Dinosaur is one of a several dinosaur-related attractions in the Town of Drumheller and measures 26.3 metres (86 ft) high and 46 metres (151 ft) long. Despite its size the beast was no match for the ZEB Horizon, with Matt being able to scan the site in less than five minutes. We think you’ll find the screenshots pretty roar-some (warning, more puns ahead)!

Scan of the Drumheller Dino with a ZEB Horizon

Next on the Teppler family roadtrip, the gang decided to boldly go where no SLAM has gone before… to Vulcan, Alberta or the “Official Star Trek Capital of Canada”.

The Starship Enterprise replica in Vulcan

There are plenty of trekkie attractions to keep you busy in Vulcan, such as space-themed murals and a Vulcan virtual reality game but none more exciting than an actual replica of the Starship Enterprise.

Going beyond the “Horizon” to outer-space

Captured in two minutes with the ZEB Horizon, there was no need to kling-on for hours as the results were an instant hit.

And finally, it may not be as much of a “hook” as the other two Alberta attractions, but the Lacombe fishing lure was recently certified the world’s largest by Guinness World Records. The lure measures over 12 metres long (or 40 feet, 5.25 inches long) more than doubling the previous record held by a lure in West Texas.

The lure immortalised in a pointcloud

Matt had a great time scanning these sites and it was made so easy with the ZEB Horizon – “I parked the car, jumped out and within minutes had a fun scan to share with the family and clients alike. It’s been a great way of showing the capabilities of the scanner, getting my kids involved and complying with social distancing rules”. The Horizon is so easy to use, Matt’s 9 year old daughter is already asking to scan the next attraction by herself! Plus, the dinosaur scan was such a hit it was even picked up by national news site CTV.

Have you scanned anywhere interesting recently? We’d love to hear from you and your scans may also end up on this blog!