Bat Conservation International work around the world to conserve different species of bats and their habitats through conservation, education, and research. Based in Austin, Texas and founded in 1982 the organisation is supported by members in 60 countries.

Part of BCI’s work involves conducting assessments of abandoned mines which bats and other wildlife usually inhabit. Most of these mines are fairly simple, but there is the occasional site which has extensive workings and capture the attention of resource managers. Due to liability, regulations, and safety concerns of many of these sites, BCI staff cannot enter deep into the mines themselves which is where GeoSLAM technology comes in. 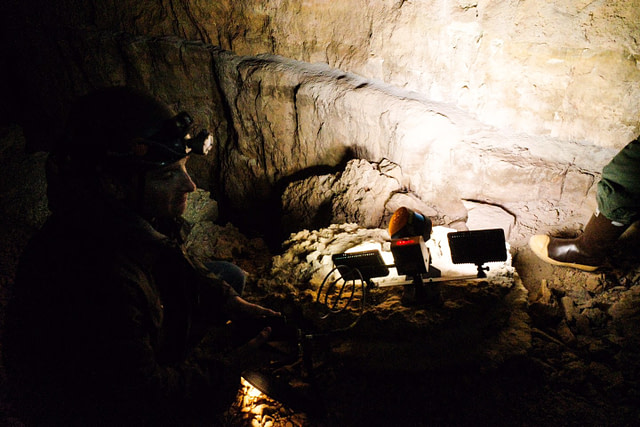 Since GPS signals cannot be acquired underground, the combination of LiDAR and 3D SLAM enables BCI to successfully scan complex mines. BCI has purchased two scanners from GeoSLAM: the ZEB Revo and ZEB Horizon. Both are compact, light, and easy to use which is a very important factor in underground work where the environment is often harsh and challenging to maneuver in.

The BCI team captures data in different ways depending which device is being used. The ZEB Horizon allows staff to capture data of hazardous areas from a distance thanks to its 100m range, while the ZEB Revo can be used in more challenging damp or dusty environments due to its high IP 64 rating. The BCI team also use both devices mounted to the pole and cradle for lowering and elevating into tight spaces.

An example of the hazardous environments the BCI Team work in

Once data is captured and processed in GeoSLAM Hub, the data from these two scanners allow BCI to create 3D visualizations, screenshots, and animations of the significant features. Due to the access issues, this pointcloud data allows resource managers to have an interactive experience of feeling like they are in a mine.

A few (of many) things BCI employees can easily point out using the data are areas of concern, important bat roosts, and items of archaeological interest. Measurements can also be made of portals and passages to help land managers plan for gating or backfilling features for closure reasons. This saves land managers from making extra trips to remote areas, asking employees about features based on memory and static photos, or sending employees back in to re-examine an area.

Pointclouds of the bat’s habitat

When BCI collects point clouds on the surface and underground alongside high accuracy GPS points that are spread out across the landscape, the data can then be stitched together and georeferenced which creates another degree of analysis. For instance, if there is a very large bat roost of an important species in a mine that BCI are concerned about and there is a road that passes by the mine. The georeferenced point cloud can be used to visually see if the road goes over the feature or take a measurement of how far the road actually is from the roost. Based off the findings, a land manager could decide to reroute the road or close it completely to avoid disturbance to the bats or their roost.